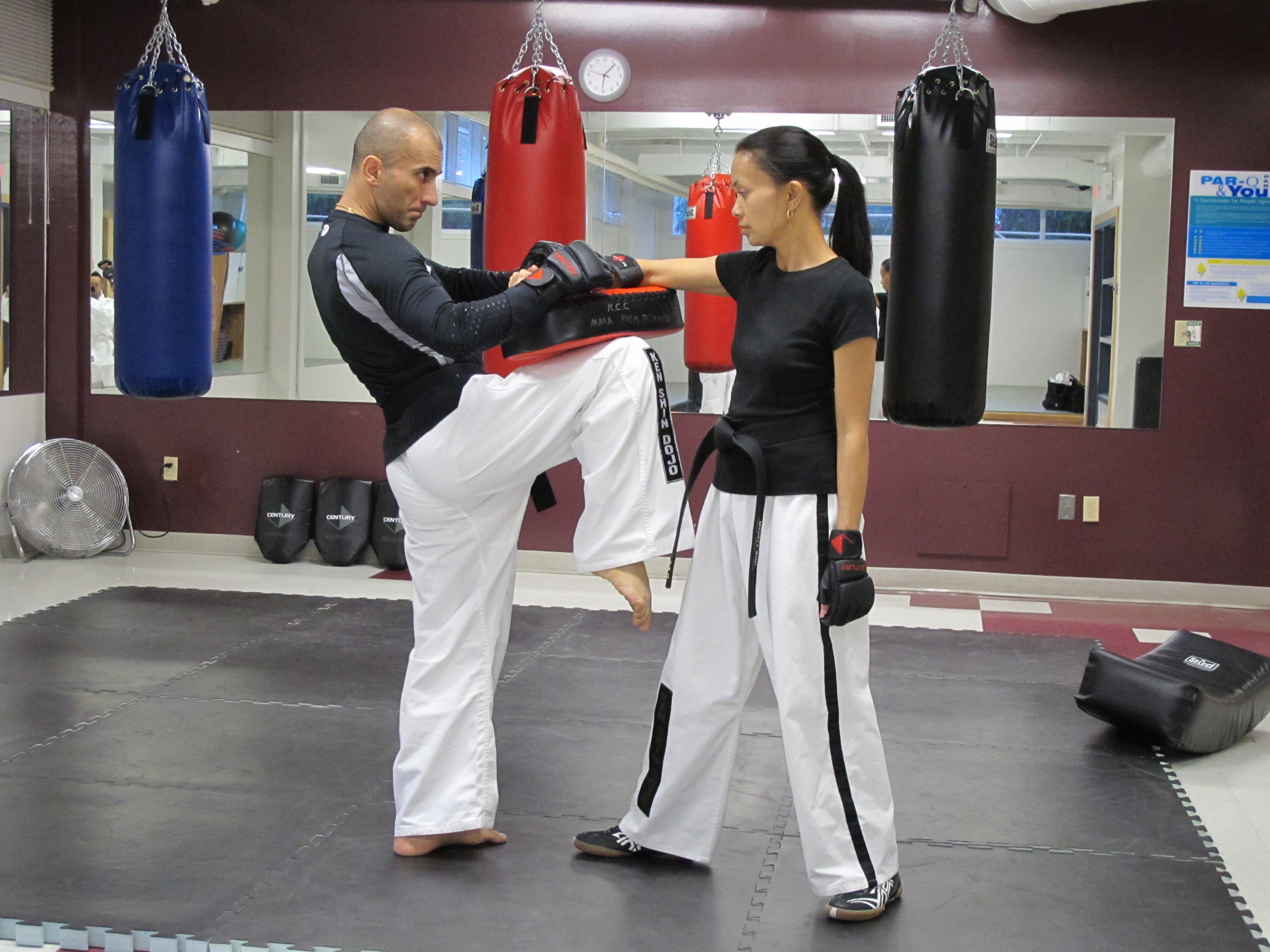 In the 1950s, Mr. Osamu Noguchi wanted to introduce to Japan what he had seen in Thailand. Consequently, he invited some Thai boxers to Japan and founded the Japan Kickboxing Association. He named the new martial art “Kick-boxing”. Tadashi Sawamura was the first Kick boxer around the world.

On December 20, 1959 a Muay Thai match among Thai fighters was held in Tokyo Japan. Tatsu Yamada who had established “Nihon Kempo Karate-do” wanted Karate matches in Full-contact rules and was interested in Muay Thai.

On February 12, 1963, there were fights between Karate vs. Muay Thai. The three Kyokushin Karate fighters went to Lumpinee Boxing Stadium in Thailand, and fought against three Muay Thai fighters. The three Karate fighters were Tadashi Nakamura, Kenji Kurosaki and Akio Fujihara. Japan won by 2-1. Noguchi and Kenji Kurosaki (Kyokushin Karate instructor) studied Muay Thai and developed a combined martial art that Noguchi named Kick Boxing. Then the first kickboxing event was held in Osaka, April 11, 1966. Because of Yamada’s death in 1967 and Tadashi Sawamura Kick Boxer retirement, Kickboxing had not been on TV until Kazuyoshi Ishii who was the founder of Seidokan Karate founded K-1 in 1993.

In 1969, famous American martial artist, Joe Lewis (1944-2012) was frustrated by the unrealistic nature of Karate tournament, in which there was no contact (not to be confused with Oyama’s dynamic Kyokushinkai fighting style). Bruce Lee refereed to this karate type of competition as “swimming on dry land”. He felt Martial Arts relied too much on mystique and not enough on practicality. Kickboxing in its present form was established in the USA during the 1970s. Bruce Lee popularized the Thai boxing style of combat and paved the way for an exciting new martial art. 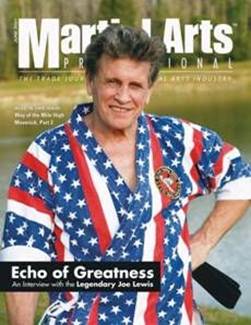 Lewis and Lee started working together formulating a new approach to the Martial Arts. Mr. Lee did not compete, but he had Lewis as his Working laboratory. Both gentle men had dream to use the martial arts in a full contact environment. Kickboxing began in the mid-seventies in the US, where Karate advocates wanted a system where they could apply kicks and punches to the knockout. The World Kickboxing Association was formed by Americans and sent teams of kick boxers to Japan to prove their skills. Joe Lewis, Bill Wallace Jeff Smith, Benny Urquidez were the stars of early kickboxing games.

In 1993, Kazuyoshi Ishii (founder of Seidokan karate) produced K-1 under special kick boxing rules with no elbow and neck wrestling. In 1993, Kickboxing became famous again and forever. This realistic approach of Martial art has spread through North America, Europe , Australia and New Zealand.

How is the winner determined in Kickboxing?

A winner is declared during the bout if there is a submission (fighter quits or fighter’s corner throws in the towel, knockout (KO), or referee stoppage(technical Knock Out, or TKO). If all of the rounds expire with no knockout then the fight is scored by a team of three judges. The judges determine a winner based on their scoring of each round. A split decision indicates a disagreement between the judges, while a unanimous decision indicates that all judges saw the fight the same way and all have declared the same winner.

Various groups came forward in an attempt to unite all these Eastern martial disciplines under one set of rules that would cover the many and various forms of combat all under one umbrella. After many years of hard work, the World Kickboxing Association (WKA) was formed. They were the first organized body of martial arts on a global scale to sanction fights, create ranking systems, and institute a development program. Today, the International Kickboxing Federation (IKF) is the most active kickboxing sanctioning body in North America and one of the top 3 worldwide organizations. The IKF also hosts the Largest All Amateur – Full Contact & Muay Thai – Kickboxing Tournament in the World, the IKF World Classic.

In Canada development of CKA/CASK has taken well over 10 years and has involved many leaders across Canada. CKA/CASK works with a number of sanctioning bodies to promote events, tournaments, and international team championships. Currently CKA/CASK is the exclusive representative for Canada with key international amateur sanctioning bodies. This provides CKA/CASK athletes the opportunity to represent Canada on the world stage. Ken shin Dojo Is a CASK certified dojo.

“A true martial artist faces reality and not crystallization of form. The tool is a tool of formless form.”
Bruce Lee

Kickboxing combines the power of modern fighting techniques with the roots of ancient martial arts knowledge. The Kickboxing pioneers took what was perceived as practical in one style and added it to what they already had achieved. In kick Boxing you are not supposed to be naturally talented with all the innate gifts of skills and strengths. We all started uncoordinated, then we learned to train smart and hard in order to conquer our fear through facing our fear. Kickboxing is a modern self-defense sport martial art. The goal in kickboxing is to utilize any number of combinations of punches, kicks, elbows and sometimes throws to intercept an opponent’s movement.

Kickboxing exercise is consistently rated as one of the most effective outlets for relieving mental anxiety. Consider this unique art as the best of the best. How better could some one eliminate all that negative energy than by target practicing and punch bag drills?

In Ken Shin Dojo, we make sure to guide students to utilize the techniques to meet their needs that their flexibility, size, strength, age, gender and speed, dictate. We also encourage students to adopt their own unique strategies that they can count on it in almost any circumstances. Rehearse the combination and counter attacks until you can respond without thinking.

Why Have a Grading System? Why Have Belts?

In Ken Shin Dojo, each student will achieve a certain expertise in techniques before he or she receives a belt. This means you earned it by hard work. The belt grading system motivates and indicates what a student has been taught until now.

The belt system indicates progress and gives students goals and a sense of achievement.

Kickboxing has a belt ranking system that almost parallels the Judo system.

It takes 4 to 5 years to obtain a Kickboxing black belt in Ken Shin Dojo. The following will be used as grading criteria

The History and Origin of the Color Belt and Ranking System

Dr. Jigoro Kano (1860-1938) took the Samurai battlefield art of Jujitsu or Aikijutsu and modified this art so as to eliminate the early dangerous results. He introduced Judo and was the first to integrate a system of Kyu and Dan into martial arts, He divided his students first into two ranks (Unranked, or mudansha; and ranked, or yudansha), and invented a belt system to recognize the difference between them. These were later divided into levels of Kyu (white belt) and Dan (black belt).

The colored belts came after Judo began to be taught outside of Japan. In 1935 in Paris, Sensei Kawaishi Mikonosuke introduced a variety of colored belts when he began to teach Jujutsu and judo. Sensei Kawaishi felt that the Europeans needed some sort of encouragement to continue training, and that a new belt at a new grade made the sport more attractive. This system was later brought into various other martial arts taught throughout Europe, but was also adopted into Shotokan Karate by Funakoshi Gichin attempting to increase Shotokan Karate’s appeal to the Japanese.

In Aikido, grand master Ueshiba determined that Kyu grades should wear white, Yudansha black and those with a Menkyo Kaiden (high-level certificate) will be 8th dan.

Achievement of belt and rank should be considered as an incentive of Kickboxing training and not a goal. The true goal is personal development and growth in mental and physical aspects.